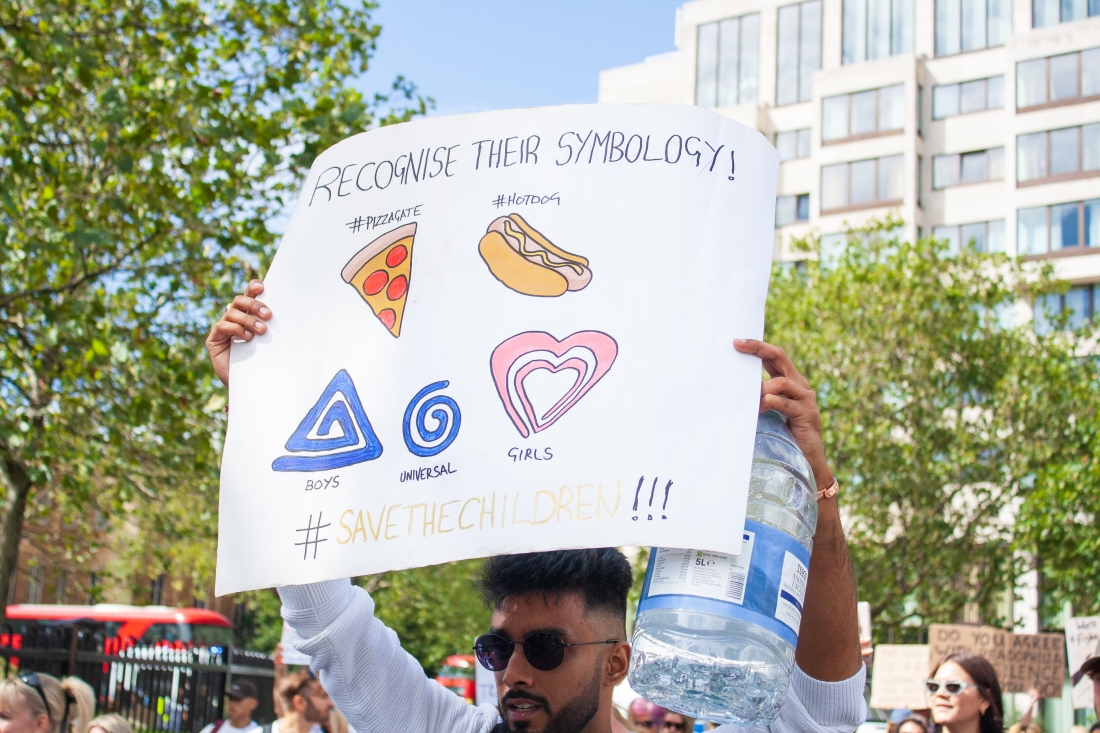 I am but a humble website-haver, and people keep asking me what QAnon is so here goes.

Once upon a time, there was an image board called 4Chan. It was full of fucking dorks. Sometimes those fucking dorks got together and did good, like when they declared war on Scientology and brought their horrific abuses into the mainstream. I should know. I was one of those dorks.

It was also a really good way to get memes going. I know 4chan people like to say they make the best memes, but really it’s just that they have a captive audience of NEETs with no social lives so of course their creations are going to propagate effectively.

One of the great things about 4chan is that it has no reputation system. You show up, you can yell all the slurs you like, and then come back tomorrow with a fresh slate. (For more on how that spills out into the wider internet see ‘The Card Says Moops’)

Which means that you, or I, or the person who is living a miserable daily existence with no hope in sight of decent mental healthcare or a loving relationship, can be whoever we want in this wonderful chaotic bubble.

2016 was fun, wasn’t it? There wasn’t a plague back then. People thought Donald Trump couldn’t be president. Boy howdy the egg on their faces. And Pepe was just, all the rage. Donald Trump gave people permission to say what they had been bottling up for so long, and the chan culture of ‘say it and run away’ was spilling over into our living rooms.

Pizzagate, seen as the beginning of the Q movement, had its groundwork laid in the 90s. Larry Nichols, a weird con-man who genuinely looks like one of the Talking Head video guys, had been saying that Hillary Clinton was a witch ever since he was fired by her husband for helping the contras.

Roger Stone, rat-fucker extraordinaire and Larry Nichols fan, knew that Wikileaks were going to release a bunch of emails from the Clinton Campaign. They were, and remain, boring as shit. Seriously, go read them. These people live dull normal lives, and good for them. But you can’t let something like this go to waste!

So how to get this party started? Simple:

2. Have Alex Jones & Co ramp up their already existing hysteria regarding elite pedophiles. Extra points go to Roger here for getting Alex on the Trump train and thus derailing his entire life.
3. Get people to drop normie-friendly content ‘proving’ this theory on mainstream sites like Reddit and Facebook.

If you’re very bored, spending an afternoon playing Roger Stone’s game isn’t a bad way to waste time as you hurtle towards the sweet release of death. At this point, the chans were already split about whether or not to support Donald Trump unironically. An actual government whistleblower had posted on 4chan before. The precedent was set.

Someone, somewhere, said ‘Fuck it, I’m in’, and a new LARP was born.

If you take Q&As then people are going to remember the answer you gave to their question. Instead of a million failed prophecies that could be interpreted however you’d like, you have a direct answer to a direct question. When all of your direct answers are both wrong and can’t be spun into something new, you’ve failed.

2. They Were Way Too Specific

I know ‘Look at the Clinton Foundation’ doesn’t seem like it’s that specific, and you’re right! But it is too specific to carry an entire cult. The gravy train stops when new threads run out and this just created an immediate dead-end.

3. Putin Was Totally In On It

Apparently nobody cared that Russia was using the Podesta emails to influence the election whilst it was happening. This one actually surprised me but go look! FBIAnon is very clear that Putin is involved in leaks and that his aim is to bring down the dastardly Clinton Foundation.

The above all helped stop FBIAnon gaining prominence, but the full mask-off of anti-Jewish propaganda was the real death knell. To quote:

You will see, in later parts of this series, that Q’s story isn’t different from that of FBIAnon. The antisemitism fully on display in this prototype was simply buried deeper.

It says something that when Q and Trump supporters are discussing the reliability of FBIAnon, this rarely comes up. The premise of a Jewish cabal trying to take over the world is a given to many of these people.

Join me for part 1 where we talk about Q rising from the ashes of FBIAnon. The LARP continues…